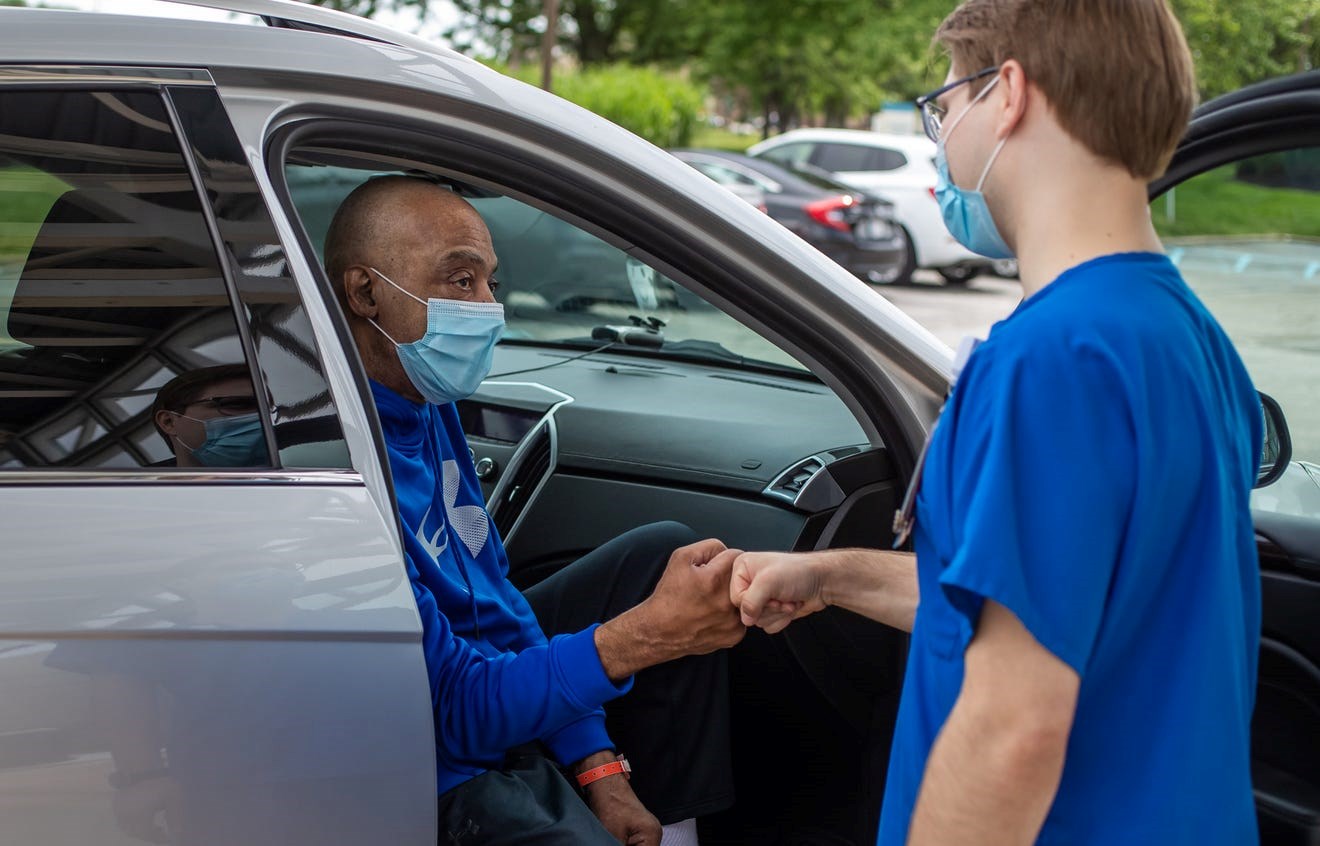 Randall Hamilton fist-bumps a nurse at Rehabilitation Hospital of Indiana on Friday, June 5, 2020. Hamilton who is a survivor of COVID-19, was discharged after being in a hospital since February 15. Mykal McEldowney/IndyStar

Arms raised high, Randall Hamilton slowly, slowly, slowly, lifted his lanky body out of the chair and walked to the hospital exit, his smile broadening with each step. About 40 staff members gathered in the lobby of the Rehabilitation Hospital of Indiana, cheering Hamilton on as he walked down the hallway, bouncing to music.

Hamilton, 70, paused to accept a red velvet cupcake from the head of the hospital, but did not linger. After all, his wife, April, waited outside with the car and it had been three months since last he saw her.

“I’ve been through hell,” he said, shortly before heading to the exit. “Take heed. This is no joke. This is a very serious disease.”

About 80% of people who develop COVID-19 have mild or moderate cases of the illness caused by SARS-CoV-2. Then there are those who die, so far about 113,000 people in the United States, more than 2,100 of them in Indiana

In between are people who are so sick they require hospitalization for days, weeks or even months. In Indiana about 17% of people who have tested positive for coronavirus have been hospitalized, with just under 4% of those in the intensive care unit, according to the Regenstrief Institute.

Doctors are still parsing statistics on the disease but they are beginning to realize that for some people who fall ill, the COVID-19 saga does not end when the virus leaves their body. They experience long-lasting effects that may take months to resolve.

Rehabilitation facilities such as RHI help bridge the gap between acute care hospital and home. When the coronavirus hit, the hospital set up a 19-bed unit to help people regain  strength and abilities. Post-COVID patients who test positive stay there; once they have two negative tests they move off the unit.

When the hospital first started accepting patients, staff members were  surprised at how weak  patients  were. At first they thought these patients would require extensive rehabilitation. But once more they were surprised at how quickly patients improved.

“COVID patients are so debilitated and the surprising thing is they do so well,” said Dr. Daniel Woloszyn, the hospital’s chief executive officer. “We were expecting those patients to have a much greater duration of need from inpatient rehabilitation.”

Since March, the hospital has treated about 45 patients recovering from COVID. Symptoms range from weakness to stroke to paralysis to cognitive disabilities.

While some patients stay as long as a month, on average post-COVID patients spend about two weeks at RHI, Wolosyzn said.

When Hamilton first arrived, he was too weak to get out of bed. He felt as if his brain had no control over  his limbs. Simple tasks such as how to use his cell phone eluded him. Not that it mattered at first; he could barely speak.

He had no memory of how he got there. The last thing he could recall was feeling disoriented. His colleagues at Eagle Truck called his wife April, telling her to pick him up. The previous day Indiana had announced the state's first known coronavirus death but it never occurred to anyone the virus was to blame for Hamilton's illness. A few months earlier he had a bleeding ulcer and similar symptoms. This, she figured, was just a recurrence.

April drove straight to St Vincent’s Hospital, where doctors agreed that another ulcer was the most likely cause. Just in case, they ran a coronavirus test. When the test came back positive five days later, she was shocked.

During the next 10 weeks, Hamilton was on and off a ventilator four times. He lost 10 pounds. He would improve then suffer a setback. On the 15th, April’s birthday, he sang happy birthday to her. He has no memory of this serenade.

A few days later, his nose started bleeding. He needed surgery but doctors would not operate until he tested negative for coronavirus. Test after test came back positive or inconclusive. Eventually they went ahead and soon after he was transferred to RHI, where he spent three hours a day doing therapy, trying to regain what he had lost.

At long last, Hamilton could video chat with April. He could not understand why she had not visited him in the hospital; he thought she had abandoned him. Little did he realize that when the ambulance had transferred him to RHI, she had stood outside waiting for just a fleeting glimpse of her husband.

On that first video chat, they said simply, Glad to see you. I love you.

Much is still unknown about the longterm effects of coronavirus infection. After all, the SARS-CoV-2 virus itself entered the world’s vocabulary about half a year ago.

Before COVID, doctors knew some acutely ill patients who recover could develop a condition known as post-ICU syndrome, though they’re not sure whether the syndrome arises because of the illness or the measures taken in the ICU to keep patients alive.

Since 2011, Khan has run the Critical Care Recovery Center at Eskenazi Health, which focuses on treating such patients. The Center screens all patients to identify any impairments they may be experiencing and to match them with therapists who can help. Until COVID arrived, most of the center’s patients were recovering from pneumonia or septic shock.

In many ways COVID-19 patients face the same challenges as anyone else after a lengthy, traumatic ICU stay. But  doctors such as Khan suspect time will prove they will struggle even more than non-COVID patients. COVID patients tend to have more lung and heart complications and require mechanical ventilation – and thus heavier sedation – than those with other maladies, said Khan, also a pulmonary critical care physician at IU School of Medicine.

“I think we will have a higher burden of post-intensive-care syndrome in COVID-19 survivors,” he said.

Khan and colleagues have created a registry of more than 200 ICU COVID survivors and will follow them for a year or longer to study their recovery course.

RHI has years of experience treating patients after an intensive care unit stay but doctors  identified some subtle differences in those who came to them after coronavirus.

Some had very very high blood pressure; others would see sudden, dangerous dips in their blood pressure when they shifted from one position to another. Many had abnormally high heart rates even at rest.

“Normally you can see trends,” said Dr. Angela Carbone, the hospital’s medical director. “This was everywhere across the board.”

Typically therapists will not continue a session if a patient’s heart rate exceeds a certain threshold, lest they endanger them. Or, they’ll administer medication to lower the heart rate. But when they tried that tactic with these patients, it would also lower their blood pressure to the point where they would complain of dizziness or even fall asleep.

Over time, the therapists realized that rather than stopping therapy, they could keep working with these patients as long as they watched carefully for symptoms. While RHI experts have noted this phenomenon in non-COVID patients, they have never seen it to this extent associated with a single disease, Carbone said.

“When nine out of 10 patients were like this, you realize it’s part of that illness and not something I needed to work up,” she said. “We decided to gently work with it and now we’re really really comfortable with knowing where the line is…. No one was injured or hurt by just going by symptoms.”

Non-physical symptoms were also common in these patients.

Many complained of feeling as if they were in a mental fog. Some remained delirious. Others who had been healthy could not remember rote tasks like how to write a check, or sort their pills in their pill boxes, said Julie Dowling, a speech-language pathologist. And most displayed high levels of anxiety.

“That was the big thing that struck me that I had never appreciated before in a patient who had been in the ICU,” Carbone said. “I think a lot of this had to do with the fact that these people didn’t see their family members.”

Until the start of this month, RHI could not offer outpatient therapy because of coronavirus restrictions. So patients were sent home with extensive instructions about doing therapy at home and family members received training from therapists via IPads.

The one question patients had that no one could answer: Will they ever return to the person they were before they were infected with SARS-CoV-2 virus?

Four months ago, Lois Sharp was an active octogenarian who cared for her son Jerry, who had suffered a stroke a few years ago. In mid-March she went to Chicago for a family party. A few days later, she started feeling tired and weak.

Then Sharp, 83, developed a fever. On March 20th her daughter Linda Conrad took her to the emergency room at IU Health West. Six days after she arrived, doctors put her on a ventilator, on which she remained for 13 days.

Much of April is a blank for Sharp. She does not remember talking to her daughter or her brother in Colorado. She can only recall some “way, way out” hallucinations.

On April 20th, Sharp transferred to RHI. At first, she was so weak she couldn’t sit up on her own. It took two people to help her turn around in her bed. Her voice was so faint she could barely make herself heard.

The first time she fed herself, she was still so weak, she was shaking. Her trembling hand had trouble bringing  forkfuls of spaghetti to her mouth. At the end, she looked down at her shirt and said, This looks a baby fed itself.

Motivation lay next door where her son Jerry was one of the first post-COVID patients RHI treated. He fell ill the day after his mother and spent about a week on a ventilator. When he was discharged, she was able to wheel down the hall with him for part of his journey to the door.

Her stay stretched on weeks.

On May 19, she went home. She had hoped to walk out, but had to be wheeled to her hospital graduation ceremony. She has continued to improve.

“Little by little. Each day I feel like I’m a little bit stronger,” she said.

Her son Jerry, 57, has recovered completely. Sharp hopes to be able to say the same someday.

For now, Sharp tries to exercise each day and use the breathing machine with which she came home. She doesn’t have much of an appetite and struggles to eat to keep up her strength. She uses a walker most of the time but can now take a few halting steps without it, although her right foot now drags when she walks.

Some days she’ll try to do too much and the next day she’ll be exhausted, Conrad said. Just walking 40 feet can send her heart rate sky high.

Each morning when she first sits up in bed, she feels ready to get up and go, she said. But then she remembers.