RHI Expands Outreach for Adaptive Water Clinic to Veterans, Thanks to VA Grant 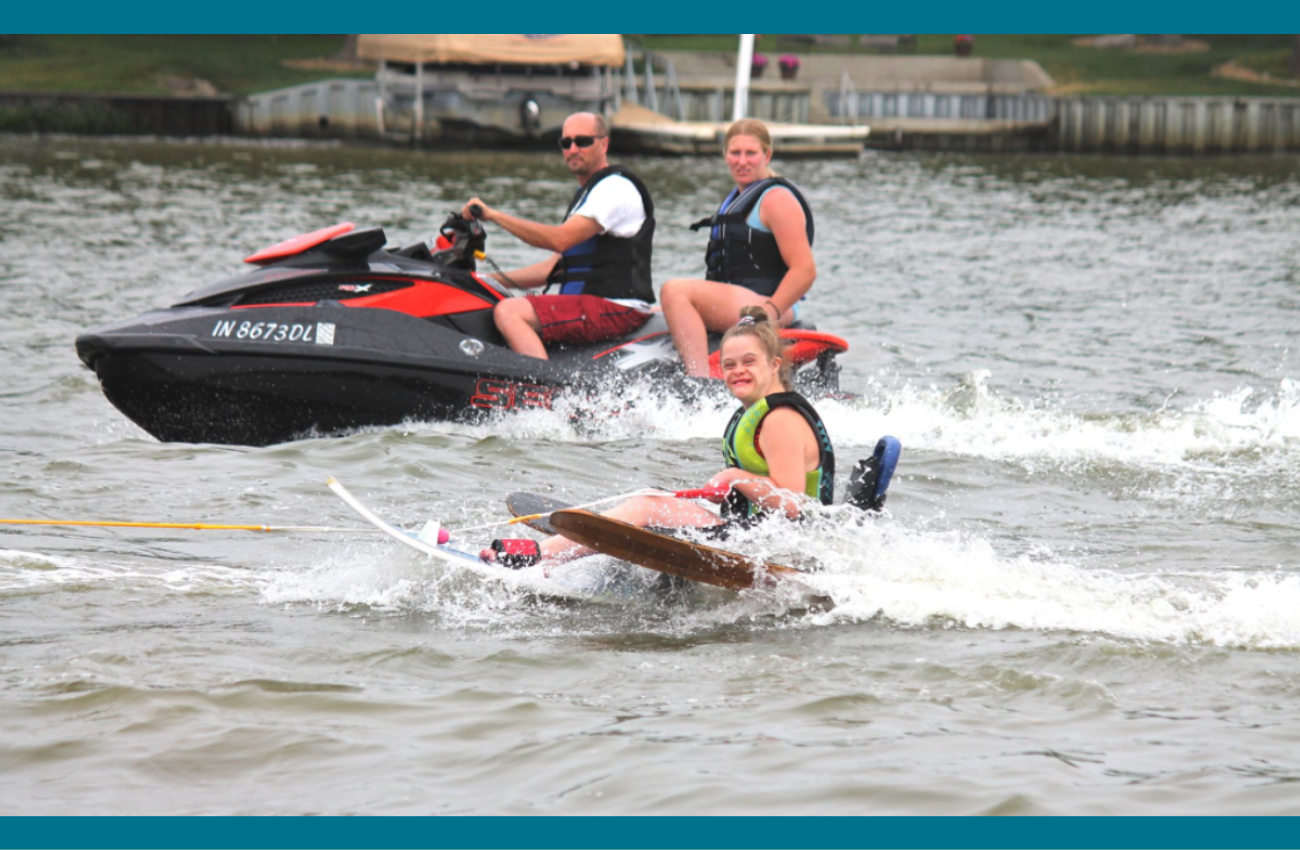 Participants get to enjoy water skiing freely, knowing that they have spotters following them the entire way.

CICERO, Ind. – Water is something U.S. Army veterans Cara Combs and William Carpenter both once loved.

After his family moved to Malta when he was 8 years old, Carpenter spent much of his childhood swimming in the Mediterranean Sea.

“It was peaceful. It was one of the first things I learned to do, swimming. It was a major part of my life there (in Malta),” said Carpenter.

But since he started having hip, leg, and lower back issues after an injury occurred while he was moving equipment on an icy landing overseas, Carpenter said he’s had to rely on a walking stick to get around. The former combat engineer also has to wear special shoes for his feet. He said his physical therapist had suggested he take up swimming, but Carpenter said he feared the pain it might illicit.

After spending a few minutes with Combs, it doesn’t take long to realize she’s an adrenaline junkie. In an orange motorcycle T-shirt, the former Army medic said she has missed water skiing. She said it was a sport she has enjoyed since childhood. But it’s been six years since she’s been in the water.

Combs said she suffered a fall a few years ago that resulted in brain bleed and two contusions in her spinal cord. Combs also said she has a traumatic brain injury.

“With COVID-19 and my health, and not being able to do sports for the last couple years, I’ve been in a deep depression to where I even attempted suicide,” said Combs. She said that staying active and social helps her fight the depression.

That’s why, when Rehab Hospital of Indiana’s Karen Lawrence told her about an adaptive water ski clinic – although Combs was unsure and nervous – she thought she would give it a try.

“What else am I going to be doing?” she said.

Combs and Carpenter said they both hadn’t heard of adaptive water skiing until recently. Carpenter said his pain management team assured him that if he tried it out with RHI, there would be people on staff that would ensure his safety.

“We have volunteers coming from RHI, some of our other hospitals, and organizations. We also have our doctors that are here too, and therapists, so what we do is provide as many individuals as we need to, depending on the demand,” said RHI Chief Executive Officer Dan Woloszyn.

Woloszyn said that adaptive water skiing for “people of all ages and all ability types, veterans, kids, to come out and really enjoy themselves.”

The adaptive water ski clinic has been hosted annually for at least 20 years, but this year, thanks to the grant from the U.S. Department of Veteran Affairs, the clinic is also trying to get the word out to more veterans.

The clinic is for any veterans “who might want to come out and enjoy, be competitive and just live life.”

But after spending a few minutes at the adaptive water ski clinic, it’s clear to see this program is so much more than just water skiing.

“For a second, I forgot I was even in a chair,” said Combs. “It was like bringing me back to when I was waters skiing on two legs.”

You could see the rush in Combs’ face as she kept telling the boat to go faster and faster.

For Carpenter, it has reignited his love for the water – and the peace and serenity it once game him.

“It’s been fun, and it’s just encouraged me to come out on my own and swim,” said Carpenter. He tried kayaking through RHI as well, after the positive experience he had with adaptive water skiing.

“I think I’ll come out her often now, even on my own,” said Carpenter with a light chuckle.

Originally published June 24th, 2021 on the WTHR website. To read the original article or more by WTHR, visit their website by clicking here.